The future of energy storage!

The Sirius energy storage system is modular and can be discharged rapidly or slowly, depending upon the requirements of the load.

With an energy density of more than 80Wh per kg, the Sirius battery can be charged in approximately 30 seconds without affecting cycle life.

An infrastructure of fast-charging stations eliminates the need for large battery banks with extended range. The Sirius offer a cycle life of 1 million cycles with a depth-of-discharge (DOD) of 100%.

The Sirius battery can be deployed in extremely harsh environments without cooling or heating. It can operate in a temperature range from -30 degree Celsius to 85 degree Celsius.

The Sirius energy storage solution is a serious alternative to all chemical batteries and is a new paradigm in energy storage. Batteries store energy in a chemical reaction. This way, ions are inserted into the atomic structure of an electrode, instead of just clinging to it like in supercapacitors. This makes super capacitors able to charge and discharge much faster than batteries.

Advantages of the Sirius Super Capacitor

by Justin King (Feb 4, 2019),
Elon Musk years ago argued that supercapacitors would be the next energy-storage breakthrough, not batteries.

Tesla has moved to acquire Maxwell Technologies, a company that specializes in supercapacitor technology.

The deal is said to be worth $218 million, representing a premium of more than 50 percent over Maxwell’s latest market value.

“We are always looking for potential acquisitions that make sense for the business and support Tesla’s mission to accelerate the world’s transition to sustainable energy,” the company said in a statement.

Tesla CEO Elon Musk has been a vocal proponent of supercapacitor technology over the years. In 2011, he made a prediction that the next breakthrough in energy storage for EVs would come from supercapacitors rather than batteries.

The technology potentially provides much higher energy density than lithium-ion batteries, with the added benefit of quicker recharge times. 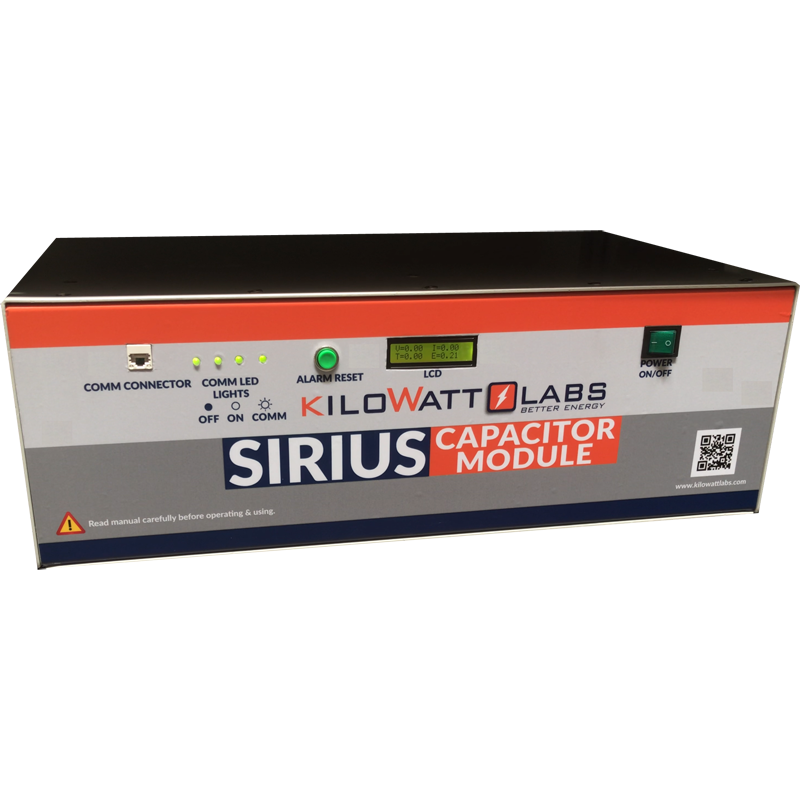 A threat to all South African businesses and households. In the Southern Cape we have almost forgot the meaning of the word “load shedding”, just to be reminded recently that the availability of AC power is under serious threat again.

The following is an extract from Fin24 “dated Thursday, 2 August 2018”

Following a number of power outages due to load shedding on Tuesday evening (31 July 2018), Eskom has warned that South Africans can expect further cuts from 05h00 on Wednesday.

Eskom has been forced to reinstate load shedding after illegal strikes by its workers left stations damaged and power supplies strained.

An internal document seen by Reuters showed that as of Tuesday, 15 units were down at nine South African power stations – taking over 6,000 megawatts or 13% of Eskom’s output off the national grid.

While many South Africans are no doubt familiar with the effects of load shedding, Eskom has also begun to issue a number of safety messages to prepare South Africans for outages.

It added that this applies to all sensitive equipment and that the greatest cause of damage to equipment from a power outage is from electrical surges.

“Installing a surge protection device can help minimise some damage in unforeseen situations when the power goes off or is restored.”

According to Eskom, other areas that you should focus on during load shedding include:

Solar4eden offer alternative DC power solutions that can assist you to keep your lights on and to lower future energy costs. Give us a call!

Eskom rates have increased with more than 300% over the last decade. In recent years unit costs has slowed down as a result of protest and public response. The recent R33bn loan from China and the question can we afford it. The Eskom financial loss in the last financial year. Recent qualified audit reports as a result of irregular Eskom expenses and poor management. Continuous Eskom salary increases above inflation rate. Increasing Municipal debt and many other reasons are a serious concern for us.

Follow the link and read the following article – 7 Reasons Eskom’s finances are at a tipping point.

Somehow soon somebody will have to pay for this, the only way out for Eskom is rate increases, can you afford it?

De Ruyter: Eskom debt will not simply disappear – we need money from somewhere

Eskom’s R450bn debt burden needs to be addressed – either through an equity injection, a tariff hike or higher sales – but the money must come from somewhere, CEO Andre de Ruyter has said.

The chief executive was among other Eskom officials who briefed the standing committee on public accounts on Tuesday, about matters relating to the Medupi and Kusile power stations. The construction of these power stations has been delayed, and there have been cost overruns running into hundreds of billions.

De Ruyter said Eskom took on three mega projects – Medupi, Kusile and Ingula – while tariff increases were capped at consumer inflation. This put the power utility in a position where “inevitably” it had to take on significant debt on its balance sheet. “This debt has been exacerbated by corruption, delays and so forth.

The very concept of being able to pursue these projects without a substantial equity injection in Eskom, is not a sustainable business model,” he added.

De Ruyter acknowledged that Eskom’s debt burden poses a significant risk to the fiscus. “The issue of Eskom debt has to be addressed in order to make us sustainable,” he said.

Eskom’s debt servicing obligations amount to about R70bn per annum, which is a “huge burden” on Eskom’s income statement, De Ruyter said.

According to De Ruyter, for Eskom to generate higher sales, it would mean having megawatts available to sell, which in turn means the power plants need to be fixed and the economy needs to grow. “It’s a bit of a chicken and egg situation. We are constrained. But once the plant is fixed and electricity is available, hopefully the brake can be released and we can move on,” he said.

So far Eskom has made an effort to bring on experienced project managers to tend to issues at plants, according to De Ruyter. “Project management in particular is a skill which has been neglected at Eskom,” he told members of Parliament.

“We have got very good engineers but project managers are needed to make sure engineers work effectively. That is a skill we lost,” De Ruyter said.

Responding to questions related to outstanding debt owed by Soweto municipalities to Eskom, De Ruyter said there had been an improvement on the previous rate of payment from 12% to 25%, owing to the president’s call for residents to pay for services rendered.

“We do need to work hard on establishing a culture of payment on services rendered. We cannot afford to supply electricity at no charge. When a service is supplied, a payment must be made,” De Ruyter said.

Eskom has been disconnecting areas where the payment rate is between 0% and 30%. While this might be an inconvenience for residents who do pay, De Ruyter said that there is no alternative. Supplying electricity free of charge puts Eskom in a “financially compromised” position, he said.

Eskom will meet gain with Scopa on March 4, 2020, when its finances will be further probed.

The National Energy Regulator of South Africa has approved electricity hikes of 9.41%, 8.1% and 5.2% for the next three financial years, far below Eskom’s application for double-digit tariff increases.
Nersa made the announcement on Thursday in Pretoria following Eskom’s application for price hikes of 17.1% for 2019/20, 15.4% for 2020/21 and 15.5% for 2021/22.The requested increases were largely opposed by business, labour and civil society in written and oral submissions.Nersa chairperson
Jacob Modise said the regulator received 119 000 written comments on Eskom’s application and held public hearings in seven out of the nine provinces.The Minerals Council of SA warned that the energy-intensive mining industry could shed 150 000 jobs if the Eskom application was granted.Earlier, Nersa said in an emailed response to Fin24 that the recent spate of load shedding in November, December and February would be considered and adjustments made “where necessary”.Eskom has previously blamed plant maintenance and breakdowns as well as delays in the completion of new power stations for the rolling blackouts.The regulator also previously confirmed that the decision to separate Eskom into three seperate entities – generation, distribution and transmission – would not affect its price determination.The 2019/2020 increase is on top of the 4.41% hike, approved for the year because of Nersa’s decision last year on Eskom’s Regulatory Clearing Account (RCA) application. The RCA refers to funds Eskom can recover due to an electricity shortfall or an escalation in operating costs.Eskom will also be allowed to ‘claw back’ R3.86bn from its RCA for 2017/2018, Nersa said.

Eskom, which is R420bn in the red, received a lifeline in the February budget speech of R23bn every year, for the next three years from National Treasury.

The power utility projects a R20bn loss for year end March and warned of further losses in the next financial year, even if the full tariff application is granted.

Nersa has previously rejected Eskom’s applications for big tariff hikes. In December 2017, the regulator denied a 9.9% tariff hike application and instead approved only 5.23%.

Solar4eden offer alternative DC power solutions that can assist you to keep your lights on and to lower future energy costs. Give us a call!

Eskom to increase electricity tariffs by 80% to recoup financial losses

The power utility is trying to offset its massive R21 billion loss incurred during the 2018/19 financial year.

While promises of rejuvenation, restructuring and resilience have been thrown about by Public Enterprises Minister, Pravin Gordhan, and even President Cyril Ramaphosa, himself, the situation at Eskom remains undeniably dire.

This grim operational and financial predicament was exemplified earlier this week when the Eskom board announced its yearly losses.

A sheepish looking interim CEO, Jabu Mabuza, who officially began his tenure on Thursday, announced that the embattled State Owned Enterprise (SOE) had incurred a loss of almost R21 billion in one year.

This is an increase of almost 800% in financial losses since 2017; signifying the rapid demise of South Africa’s power supplier. And while the much-loathed load shedding schedule, which cost the economy billions of rands in 2018, has been put on ice, the month of August – and beyond – brings with it more bad news.

Energy experts have warned that load shedding is likely to make an ominous return in August after Eskom announced that it was struggling to meet energy demands earlier in July.

The power utility’s continued operational sustainability rests solely on the shoulders of government via the way of taxpayers’ hard-earned cash. But even gratuitous government bailouts – estimated to total in excess of R120 billion within the next two years – will struggle to keep the fires burning.

A dismal power plant maintenance routine – coupled with board uncertainty – means that South Africans are in for a rough ride – whether it be at the mercy of load shedding, greater taxation or increased electricity tariffs.

The latter is being eyed by Eskom as a way to recoup its R21 billion loss.

South Africans to brace for 80% increase in electricity costs

According to Ted Blom, lead contributor to the Energy Expert Coalition, Eskom seeks to implement a four-step turnaround strategy, which includes:

While all of the above are contentious – and slightly vague – it is point number one which will have South Africans fuming.

In April, Eskom implemented a 14% tariff increase which had been approved by the National Energy Regulator of South Africa (NERSA). Further tariff hikes approved by NERSA will, in 2020 and 2021, increase the cost of electricity to consumers by at least 22%.

While a 22% hike is bad enough – the 80% raise, cited by Blom, would be wholly unbearable for most South Africans.